Home - News - An overview of the third brush system for LYNX

One of the most requested upgrades for the LYNX compact sweeper, the third brush system, is now available for orders. This optional system can be installed when the sweeper is initially being assembled, or alternatively can be added onto the vehicle later provided that the sweeper is configured with the required hydraulic preparations. This also means the third brush system can easily be demounted and stored at any time when its use is not required. 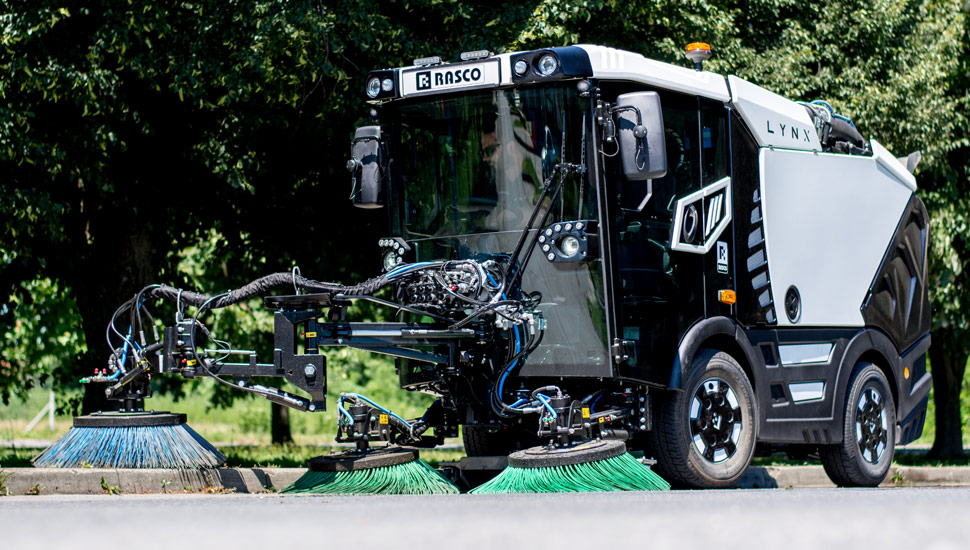 The third brush system can be used in several ways: to increase the maximum sweeping width, to sweep both the road and the sidewalk in a single pass, or to dislodge stubborn weeds and dried up mud in front of the standard two brushes. The multifunctionality of the system is achieved by the possible choice of different types of brushes ranging from a soft plastic brush to the weed brush, which consists of hard woven metal cables.

LYNX’s software system automatically detects when the third brush system is connected or disconnected and accordingly adjusts the information shown on the overhead LCD display, as well as all other necessary settings.

A lot of attention during the design phase was directed towards the usability and longevity of the third brush system. The physical construction is simple but robust and includes minimal wear parts. The system is compact but does not interfere with the kinematics of the standard two brushes. The third brush is quickly secured in transport position using a single pin.

With its multiple uses and excellent working results, the third brush system is an ideal upgrade for the LYNX power user. Watch the video below to see how it performs in real-life conditions:

On the kart racing track St. Rauš in Novi Marof (northern Croatia) the competition FS Alpe Adria took place from August 23 to 28. 1200 students participated in 46 teams from 18 countries from all over the world. All teams compete in designing and building prototype racing cars....

MUVO, the first utility vehicle developed in Croatia, has contributed to RASCO gradually taking its position among the leading manufacturers of professional equipment for the maintenance of traffic infrastructure in Europe. The know-how acquired during the development and...