With the launch of the new MUVO website, RASCO celebrates an important milestone in the company's history - 10 years of MUVO on the market.

MUVO, the first utility vehicle developed in Croatia, has contributed to RASCO gradually taking its position among the leading manufacturers of professional equipment for the maintenance of traffic infrastructure in Europe. The know-how acquired during the development and production was later enhanced by new research and development projects and the expansion of the RASCO vehicle portfolio.

First utility vehicle developed in Croatia – in use around the globe

The development of the vehicle began in 2008 in response to the growing demand on the utility vehicle market in Europe. Testing of the prototype began in 2010. The first commercial version of the vehicle was presented at IFAT 2012 in Munich. Following the official sales launch in 2013, MUVOs were gradually incorporated into the municipal fleets of numerous cities on three continents.

The first MUVO went to the city of Bergen in Norway. It is still in use for winter maintenance and has accumulated over 10,000 working hours over the years. Since then, MUVO can be seen in action on the streets of major cities like Paris, Berlin and Copenhagen. At airports in Munich and Istanbul, in Tasmania and in many other places around the globe. MUVO is also in use in more than 30 cities in its home country of Croatia. MUVO No. 350 found its place in Macedonia in June 2022.

RASCO is marking this important anniversary by integrating it into most of the company’s activities in 2022. After being first introduced to the public at IFAT Munich 2012, MUVO was presented in its anniversary edition at IFAT 2022. Earlier this year, MUVO got its new video. And now the new MUVO website has been launched. The new website has been designed with a carefully planned user interface to ensure the best possible user experience. It not only shows the features and benefits of the vehicle, but also explains how MUVO can be used for different tasks; such as winter maintenance, city street cleaning, vegetation maintenance or waste collection.

See it live at muvo.rasco.hr 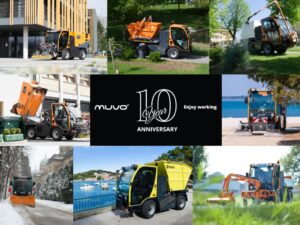 On the kart racing track St. Rauš in Novi Marof (northern Croatia) the competition FS Alpe Adria took place from August 23 to 28. 1200 students participated in 46 teams from 18 countries from all over the world. All teams compete in designing and building prototype racing cars....

After not taking place in 2020 due to the Covid 19 pandemic, IFAT is back. The sustainable use of resources and thus climate protection is the main theme of IFAT Munich, which will be held from May 30 to June 3, 2022, at the exhibition centre in Munich. Sustainability is an...